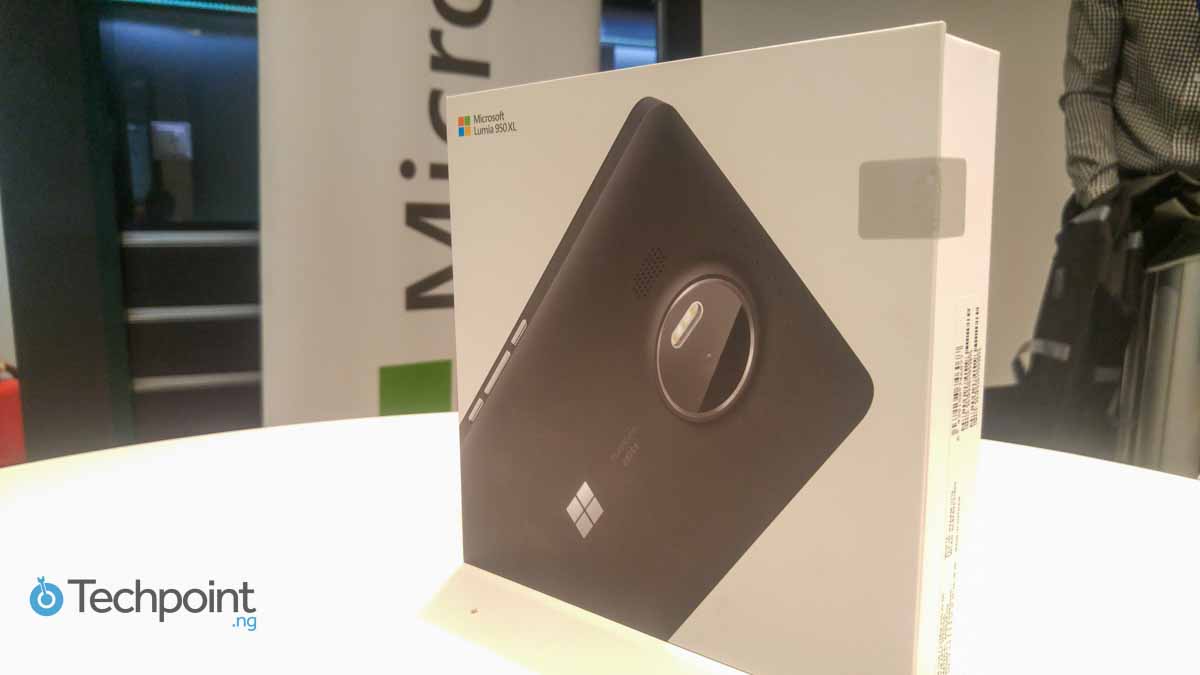 In a recent show of brazen defiance, Microsoft launched three badass Lumia phones, the Lumia 950, Lumia 950 XL and the mid range Lumia 550 into the Nigerian market. I say brazen because we all say ‘long time no see’ to Lumia phones. And the phones are badass because they are the first Lumia devices running on the Windows 10 Mobile operating system.

As part of its commitment to productivity, Microsoft also launched a display dock that connects the Lumia 950 and Lumia 950 XL to any kind of external monitor or screen and virtually turns the phone into a CPU of sorts.

I unboxed the Lumia 950,Lumia 950 XL and the Microsoft Display Dock and here are a few pictures of the supermen and additional information.

Whats in the box?

The Lumia 950 is in a white box with plenty compartments and the device in transparent cellophane wrapping,

The slide out package of the Lumia 950 contained the device,  charger, USB cable, a user manual, and an accessory I have not seen in a long while — earpiece.

On the right side of the device, there are the volume buttons at the top and the power button below them.

Underneath is the charger/USB port

The Lumia 950 is not too big and small isn’t a good qualifier either. My hands are big and that is how 5.2 inches look in the giant paws.

The Lumia 950 XL comes in a slide out styled pack with a silver seal protecting it.

Opening the box, there is the device itself, USB type C charger, a USB cord, and the earpiece.

Underneath is the USB port for charging and connectivity.

With a 5.7 inches screen, the Lumia 950 XL is a few centimetres shy of 6 inches and that to me screams ‘Phablet’ in all its magnificence.

It’s funny, but the Microsoft Display Dock is packed like a smartphone itself, even better. The white cardboard packet comes with compartments, plastic wrappings and the whole works. Inside the box is the charger, USB cord and the device itself.

On one side of the device, there are the multiple connectivity ports for charging, HDMI and 3 ports dedicated to USB alone.

The Microsoft Display Dock is connected to your Lumia 950 and Lumia 950 XL via a USB cord and a HDMI cable in turn connects the device to your choice display medium, screen or even a basic television screen. And a mouse is added to the mix to move cursor around. The HDMI cable is not included in the package though and have to be bought separately.

Believe it or not, the Lumia 950 and Lumia 950 XL were pegged at above ₦150,000 apiece. In defence of the ‘plenty money’, a spokesperson for Microsoft Nigeria said the company are more interesting in making quality durable devices regardless of price than affordable phones.

The Microsoft Display Dock would go for  ₦15,000 when it finally comes on sale. And for the value it offers — turning your phone into a portable CPU- the dock is well priced.