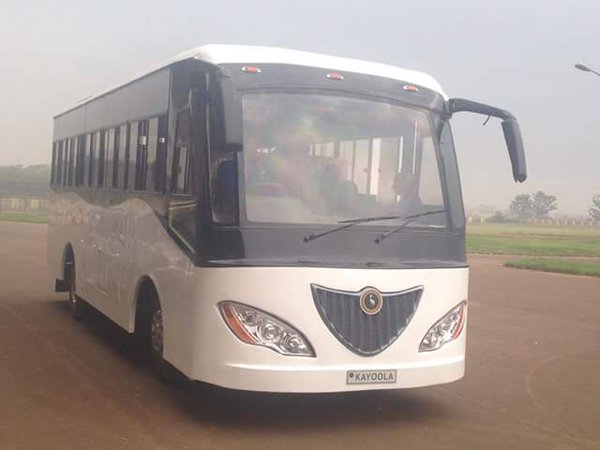 Kiira Motors Corporation is set to launch Africa’s first solar-powered bus ‘Kayoola’ as part of the corporation’s vision to spearhead the automotive industry in Uganda and Africa at large.

The name ‘Kayoola’ can be loosely translated as ‘mass carrier’ and the bus is uniquely designed to be powered by solar energy to make it environmental friendly. It relies on 2 lithium-ion batteries which power an electric motor that is coupled to a 2-speed pneumatic shift transmission.

The 2 power banks operate in automatic alternation to enable real time mobile battery recharging while the other is in use thereby eliminating the use of any other fuel source. The solar panels on the roof harvest energy to run the bus on a range of 80kms  or approximately 8 hours of nonstop movement.

With a seating capacity of 35 passengers, the bus has a power capacity of 150KW (204HP) Peak and solar power of 1320W the Kayoola is a wonder. According to Mr Isaa Musasizi, the CEO Kiira Motors Corporation

“Uganda is privileged to be among the 13 countries in the whole world that is situated along the equator. We decided to take advantage of this strategic position to improve transport technology,” he said.

Mr Musasizi stressed the fact that most of the bus features are locally sourced and were assembled by a team of about 100 Ugandans who did the wielding, spraying, wiring among others.

“The body is typically our roofing material and was worked on by hand. Also, the battery banks which are stainless steel were also fabricated from here. Uganda possesses polished skills to deliver automotives today.”

“We have buses all over the world but Ugandans must be proud to be championing a technology that represents clean energy. The Kayoola sets a green precedence and inspiration trend for technological future in urban mobility for East and Central Africa.”

Yoweri Museveni, the Ugandan president will be officially launching the Kayoola solar bus on February 16 at Kampala Serena Hotel and the countdown is on the corporation’s website.

Kiira Motors project is an industrial development intervention fully funded by Government of Uganda. It is aimed at establishing vehicle manufacturing capabilities in Uganda for Pickups, SUVs, Sedans, Light and Medium duty trucks and buses.