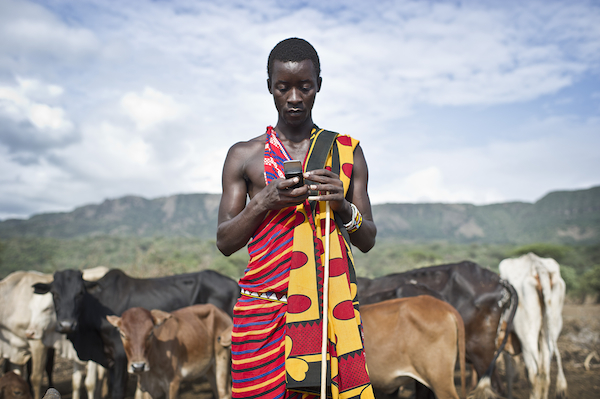 Data from the TeleGeopgraphy’s GlobalComms Database has revealed that there are now 7.1 billion mobile subscriptions across the globe and Africa shares 912 million of this, representing 12.8% of the global figure.

Looking at the future projection of African population, there’s definitely a huge potential for mobile growth on the continent.

There is also room for continued growth throughout Africa, where wireless penetration stands at just 81% — well below that of any other region. 2G remains the dominant mobile technology, by far, accounting for over 75% of the continent’s 912 million subscribers. While 3G continues to gain popularity as it becomes more widely available, LTE is still almost nonexistent in Africa, with less than 0.5% of mobile subscribers using the technology as of Q1 2015.

Europe recorded 138% wireless penetration rate, the highest by any region, and this is despite a fall in mobile subscription by six million.

Asia tops the table with 3.7 billion mobile subscriptions, with two countries accounting for 2.3 billion subscriptions – China and India. But more than 270 million Asians are still without a cell phone, an indication that the continent is not close to saturation.